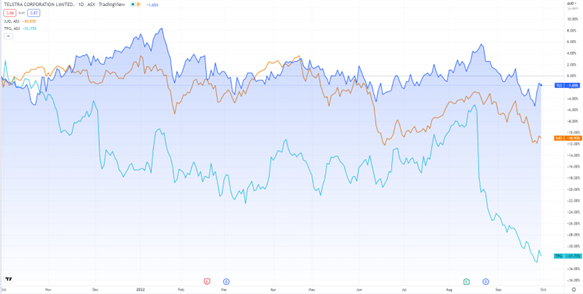 ACCC Commissioner Liza Carver said the regulator is calling for more industry and consumer feedback on how the proposed deal will ‘impact competition and whether there are public benefits’.

TLS shares were flat on the news and are down roughly 10% year to date:

The ACCC is investigating a proposed regional deal between Telstra and TPG.

The telco pair is asking the ACCC to authorise the acquisition of certain TPG spectrum assets.

Under the proposed deal, Telstra would obtain much of TPG’s mobile spectrum in outer-suburban and regional areas, affecting 17% of the Australian population.

Telstra would also receive 169 of TPG’s mobile sites in that area.

In turn, TPG will shut down 556 mobile sites in the affected areas, acquiring mobile network services from Telstra for mobile coverage.

‘The ACCC has today set out issues for further consideration and is calling for further views from industry and consumers on how these agreements may impact competition and whether there are public benefits.

Ms Carver stressed the critical importance of fair and equal competition and that the ACCC will examine all aspects of the agreement closely.

According to the Commissioner, approval will only be granted if competition for other networks in the area are unlikely to be impacted, or if public benefits outweigh anti-competitive concerns.

The ACCC’s decision will be announced in early December.

You can read the ACCC’s preliminary views on the deal in full here.

Telstra–TPG deal: ‘A lot of work to do’

Interestingly, the ACCC Commissioner emphasised that the regulator’s review of the proposed network deal was complicated and nuanced.

The Commissioner also admitted that the ACCC had not reached any overall conclusions, warning that a decision — either way — can have ‘significant long-term effects’:

‘There is still a lot of work to do on this complicated and nuanced review, which is of critical importance to competition in the mobile telecommunication sector. At this stage we have not reached any overall conclusions, but welcome further submissions from stakeholders and consumers alike on the issues raised.

‘We are looking extremely closely at all aspects of these agreements, as a decision either way can have significant long-term effects.’

How to find inflation-busting stocks

But some businesses handle inflationary times better than others.

In fact, some stocks have the potential to act as ‘inflation busters’ in such bearish cycles.

Recently, we released a research report on five inflation-buster stocks for 2022.

If you want to read it, you can access the report for free here.