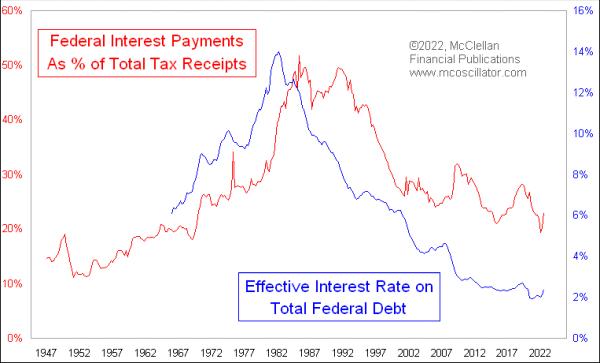 Total federal debt has risen in every year since the 1950s. It even rose during the supposed budget surpluses back in 1999-2000. A little bit of debt is not a problem, but, when the total debt gets up to a really high level, it becomes a really big problem.

This is because even Uncle Sam has to pay interest on the public debt. The US gets a better rate than anyone else, because repayment is always guaranteed, even if it is just with overprinted money.

This week’s first chart looks at the effect of interest rates on those payments. Back in 1981, the total federal debt only amounted to 31% of GDP, which was the low point of the last few decades. But interest rates on that debt were really high, thanks to Fed Chairman Paul Volcker thinking that higher rates would help conquer inflation. And so, at the worst point of those high rates later in the 1980s, the cost of paying interest on that debt accounted for more than 50% of total tax receipts.

Thankfully for all of us, the lower interest rates have meant a lower portion of the federal budget going toward interest rates. But that only remains true if interest payments remain low.

The most recent data on this, which are as of Q3 2022, show that the effective interest rate on all of the Treasury’s debt is 2.4%. Short-term paper like 3-month T-Bills are now higher than that, but the Treasury Department locked in lower rates a couple of years ago, when rates were really low. That is helping to keep the total amount of money spent each year on financing the debt at a fairly low level. 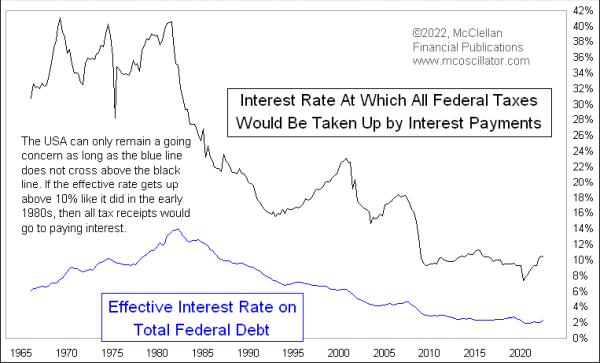 But if the Fed is unsuccessful at conquering inflation this time, then it is possible that interest payments on the federal debt will get out of control. Total federal debt is now up to 120% of GDP. And so, if the net effective interest rate on all of that debt gets up above 10.4%, then paying the debt service would account for every tax dollar currently coming in.

That makes it very unlikely that we are going to see a federal income tax rate cut anytime soon, even though such a cut might help boost GDP and improve that ratio. This is relevant to stock investors because, as we see in the final chart, having high tax collections as a percentage of GDP is NOT a good condition for the stock market. 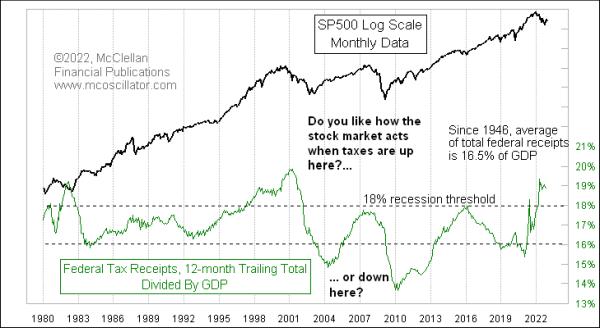 Stocks do much better in the months after a very low rate of tax collections, especially below 16% of GDP. Getting up to above 18% of GDP has produced an economic recession every time it has happened. This measure is currently at 18.9% of GDP (and spending is at 24.0%) for the past 12 months.