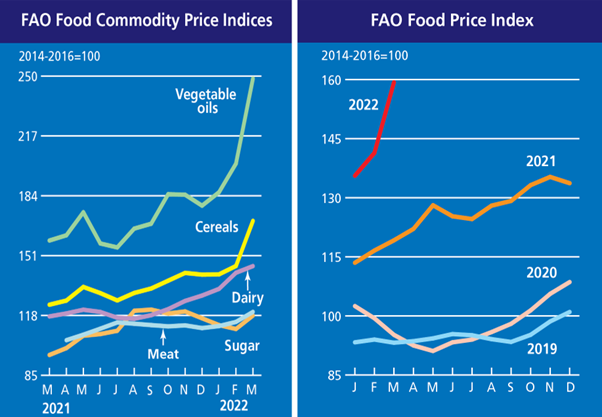 The recently published inflation numbers by ZIMSTATS were not so surprising given that the ongoing war in Ukraine is posing a looming threat to worldwide food supply.  The year-on-year inflation rate for the month of May 2022 stood at 131.7% whilst the month-on-month inflation rate was 21.0%, gaining 5.5 percentage points on the April 2022 rate of 15.5%. Piggy also observed that the month-on-month Food and Non-Alcoholic Beverages inflation rate increased from 18.5% in April 2022 to 26.0%.  Clearly, the war in Ukraine has disrupted the food system globally, given that it is in such a critical food supply hub—especially when it comes to wheat and to fertilizers.

Russia and Belarus are critical for the export of fertilizer, which is the most important yield driver for farmers globally. It is estimated that the Ukraine–Russia region is responsible for roughly 30% of global exports of wheat and 65% of sunflower. Piggy notes that fertilizer is probably the most important input for farmers. Depending on the crop, fertilizer roughly constitutes 30% of the overall cost of operations. On the other hand, wheat is a critical component of food security. Over 80% of wheat is primarily used for flour and a wheat price increase can translate into an increase in basic bread prices since wheat represents c60% of raw-material costs. Shortages of these and other commodities have destabilized global supply chains, sending food prices soaring. The FAO Food Price Index which measures the monthly change in global prices of a basket of food commodities shows a 12.6% increase in global food prices compared to February, the highest price levels recorded in the index’s three-decade history. Staple goods like grains and vegetable oils are among the worst affected foodstuffs. The FAO Cereal Price Index was more than 17% higher in March than February 2022.

During an address to the African Union’s F15 Group of Ministers of Finance in April 2022, Dr. Akinwumi A. Adesina, President, African Development Bank Group pointed out that the price of wheat had soared by an average of 45% in Africa and that the cost of bread is now beyond the reach many Africans. In addition, the prices of fertilizers have gone up by 300% and the continent faces a fertilizer shortage of 2.0 million metric tonnes. If this shortage is not met rapidly, food production will decline by 20%, and the continent will lose an estimated USD11 billion in value of production. Coupled with rising energy prices, skyrocketing inflation and the erosion of consumer buying power, there is the risk of food riots, social and political unrest.

A key concern is that major food producing countries are banning exports. More recently, Malaysia banned the export of poultry while India banned wheat exports. According to the International Food Policy Research Institute (IFPRI), at least 20 countries have imposed some sort of limit on exports since the war began. On the local front, Zimbabwean cooking oil producers have warned of potential supply shortages after Indonesia, the world’s biggest palm oil exporter, imposed a ban on palm oil exports to avert potential domestic shortages. There are also growing fears that the ban on palm oil exports will result in more global oil expressors turning to soya bean oil as a substitute and this will exert more pressure on demand.

Overall, without both food imports and serious efforts to boost food production, Sub Saharan Africa would not be able to insure adequate food supply for the population. Climate change will also likely make it even more difficult. This puts Sub Saharan Africa as a region with greatest food security risk. That said, an increased focus on food production will augur well for companies such as SeedCo Limited and SeedCo International. The dominance in the region coupled with the Government’s strong focus on agriculture should also help earnings growth in the outlook period. Piggy views SeedCo Limited and SeedCo International as vehicles of gaining exposure in the food demand growth story in Sub Saharan Africa. BUY! Get more tidbits on the stock market by joining the PiggyBankAdvisor Telegram Channel (+263 78 358 4745).