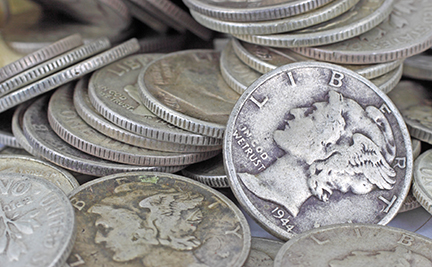 Inflation – What is it, and how to hedge against it.

Just like compound interest compound inflation grows faster and faster.  The average annual inflation since 1913 was only 3.24%. Compounding something for over 100 years at 3.24% will result in over 2000% inflation. This means that something that cost $9.80 in January of 1913 would cost $234.15 today!

This my friends this is how inflation works and how it has impacted our country. It also explains why middle income is deteriorating and income inequality is growing.

It’s difficult to realize that the dollar has lost over half of its value in the last 40 years. One dollar in 1988 could buy what $2.33 can buy today. This is why everyone should hedge against inflation.

Macroeconomics trends, including the COVID-19 stimulus package, expected GDP gains, and anticipated reduction in unemployment, suggest inflation is on the horizon.

Higher consumer prices typically mute portfolio returns. “Inflation creates higher costs for companies to produce their goods and services. To cope with inflation, companies may have to raise prices, accept lower margins or cut costs. This can have a negative effect for stocks that cannot pass price increases through to their customers, as lower margins mean less earnings for shareholders.  With economic forecasts between 2.6% – 4.2% inflation by year’s end, now is the time to get your portfolio into shape.

It seems your dollar isn’t going as far as it used to in acquiring hard assets, real estate or business assets. This is not surprising, given how many of those dollars are being manufactured at the Federal Reserve.

The Fed conjures up new money as it expands its collection of Treasury bonds. Its balance sheet has ballooned by $3.4 trillion since the start of last year. The official word for this process is “stimulus.”

What can us meager investors do to help?

To individuals, losing purchasing power as a result of inflation is perhaps the most detrimental feature of rising prices. Anticipating those increases, prudent investors explore ways to hedge against inflation.

An inflation hedge involves investing in an asset that is expected to maintain or appreciate in an inflationary period. Hopefully, its appreciation exceeds or is at least comparable to inflation.

Looking to the past to predict the future

Real estate has long been considered a hedge against inflation, as rent and property values tend to increase with inflation. Historical empirical evidence supports real estate and farmland as effective inflation hedges. There’s an old saying; We make more people, but we can’t make more land.

Accordingly, anticipating a period of inflation, savvy investors are expanding their real estate portfolios. Although rising prices, let alone investments, can never be fully anticipated, the best known predictor of the future is the past.

Billionaire industrialist Andrew Carnegie stated once: “Ninety percent of all millionaires become so through owning real estate. More money has been made in real estate than in all industrial investments combined.”

In the past year: house prices in some areas have gone up 13.4%.

If inflation returns, it’s generally bad for the bond market, however it could be great for the stock market.

Buying preferred stocks is another possibility. These liquid offerings will pay a higher yield than most types of bonds and may not decline in price as much as bonds when inflation appears.

Utility stocks represent a third alternative, where the price of the stock will rise and fall in a somewhat predictable fashion through the economic cycle and also pay steady dividends.

Investors have turned to hard assets such as silver and gold in 2020 as central banks continue to print money in response to the pandemic. Gold has a history of low returns with enormous volatility. But under a highly inflationary environment, they tend to perform.

Gold may not be an inflation hedge. It’s possible the massive repricing of gold that occurred in the 1970s when Nixon ended the convertibility of dollars into gold made people believe gold was an inflation hedge. But gold tends to simply march to its own drummer. Sometimes it works under deflationary crashes as well.

Silver is trading at around $28 an ounce to date, more than a 50% increase compared within the last few years and about a 70% rise from five years ago.

Silver also acts as an inflation hedge. As a physical asset, it has intrinsic worth, unlike the dollar or other currencies. Silver holds its value long term and fares well when interest rates are low — and fixed-income investments aren’t earning much.

Investors are seeking a safe haven since the federal stimulus packages are undermining the value of the dollar. If the depreciation of the dollar continues, you could see the continued benefit of investing in silver.”

Silver remains an affordable asset for investors who are seeking a hedge against inflation. The precious metal reached $28 plus an ounce in in late May, while gold now hovers at about $2,000 an ounce. Silver has a much lower price point, and silver tends to be a more palatable trade for the average investor.

Bitcoin supply is capped at 21 million, so presumably the cryptocurrency is protected from the kind of money printing that devalues traditional currencies.

Some of this is still hard to gauge, because major developed nations — particularly the U.S., have seen relatively little inflation over the past decade. Bitcoin has not been fully tested in a truly inflationary environment.

Cryptos have skyrocketed in market value in the past year. However, to be enduring as hedges against inflation—as gold has been for centuries and deemed trust worthy, they must be more than speculative vehicles.

For all of 2020 and pretty much up until April, Bitcoin has been the best performing asset, so it’s not hard to say it is an inflationary hedge given all the stimulus that keeps getting poured into the global economy.

Hardcore Bitcoin enthusiasts say the digital coin is the world’s best hedge against rising consumer prices. … With the economic outlook perking up, Covid-19 cases falling, and greater amounts of fiscal stimulus on the horizon, investors in all kinds of assets seem to expect a bit of a rise in prices.

Interest rates are low in the traditional core markets of the USD and EUR due to the global financial crisis in 2007-2008. The US Federal Reserve and European Central bank pursued easy money policies with next to zero levels of interest rate in order to encourage high rates of liquidity and support the tenuous position of the commercial banks. As a result of these low interest’s rates, global investors found an opportunity for interest arbitrage and shorting the US and EU currencies in order to make a profit.

30 year fixed interest rates on a home is hovering around 3.25%, giving homebuyers a 1% net gain if inflation continues at its current rate.

Real estate has historically appreciated at a rate of between 3% and 5% per year, depending on the price index you’re looking at. The U.S. House Price Index shows that prices have risen at 3.4% per year on average since 1991. There is no universal rate, but in comparison of home values to the historical standards, we can see a pattern of appreciation throughout the years.

The economy also has a lot to do with appreciation values. Things like inflation have the power to increase or decrease the profit of homes. An increase in money supply causes things like house prices to go up, as well as everything else. That’s why we shouldn’t just print more money.

The post Inflation is on the way! appeared first on The Tidy Wallet.