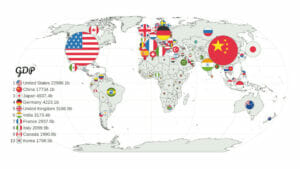 Which countries have the largest populations? What about the rural versus urban population divide? And which countries have the highest Gross Domestic Product (GDP), military expenditures, or tech exports? Instead of comparing countries by one metric, this animation and series of graphics by Anders Sundell uses 20 different categories of World Bank data to compare […]