It would be difficult for our opinion of Powell and Co. to be any lower, and yet we still manage to overestimate them.

Having correctly anticipated that the Fed had paved the way for a major inflation problem — a problem that would become evident in commodity, goods and services prices rather than just asset prices — during the first half of 2020, we were surprised that the Fed continued to stimulate after such a problem became blatantly obvious in 2021. And over the past few months we have been surprised that the Fed remained on an aggressive monetary tightening path after it became clear that the equity bubble had burst, the US economy had entered or was about to enter recession territory, commodity prices had set intermediate-term peaks and forward-looking indicators of the CPI were in downward trends.

With regard to forward-looking CPI indicators, one of the most useful is the difference between the 10-year T-Note yield and the 10-year TIPS yield, a.k.a. the 10-year Breakeven Rate, which is a measure of the future annual percentage growth of the CPI factored into the bond market. The following chart shows that over the past two weeks this indicator made an 18-month low. 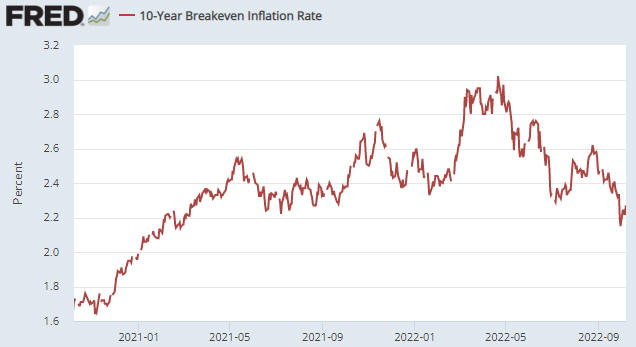 Another forward-looking CPI indicator is the ISM Manufacturing Prices Paid Index, an index based on a survey of purchasing managers at US manufacturing companies. As illustrated below, this index has plunged over the past six months to its lowest level in more than two years.

A popular view at the moment is that inflation will prove to be sticky. Well, if the Fed continues along its current path then many people are going to be surprised at just how non-sticky inflation proves to be. We think that if the Fed stays with its current balance-sheet reduction plan until early next year, then by this time next year the year-over-year growth rate of the headline CPI will be less than 2%. It could even be negative.

One of the reasons that the Fed may continue along its current path for a few more months is that policymakers are focusing on the headline CPI growth numbers, and these numbers will remain at very high levels for at least a few more months due to the large price rises that occurred during the first half of this year. Putting it another way, there won’t be a substantial decline in the CPI’s year-over-year growth rate until the large gains that occurred during the first half of this year start dropping out of the calculation. Until then, it’s possible that the Fed will be under political pressure to persist with its “inflation fighting”, and Powell has demonstrated that he is very susceptible to political pressure.