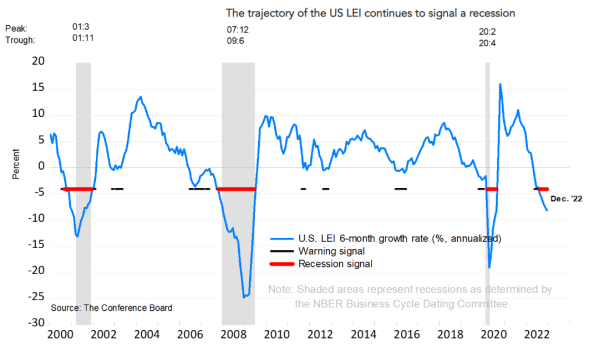 Stocks are higher this morning on no real news. Bonds and MBS are down.

The week ahead won’t have much in the way of major market-moving data, but we will get a few important reports including the advance estimate for GDP on Thursday and personal incomes and outlays on Friday. Earnings season picks up in earnest with a slew of major companies reporting including Tesla and Microsoft. We won’t get any Fed-speak as we are in the quiet period ahead of the FOMC meeting next week. We will get the debt ceiling kabuki theater performance as well.

The Index of US Leading Economic Indicators declined again in December, following a decline in November. “The US LEI fell sharply again in December—continuing to signal recession for the US economy in the near term,” said Ataman Ozyildirim, Senior Director, Economics, at The Conference Board. “There was widespread weakness among leading indicators in December, indicating deteriorating conditions for labor markets, manufacturing, housing construction, and financial markets in the months ahead. Meanwhile, the coincident economic index (CEI) has not weakened in the same fashion as the LEI because labor market related indicators (employment and personal income) remain robust. Nonetheless, industrial production— also a component of the CEI—fell for the third straight month. Overall economic activity is likely to turn negative in the coming quarters before picking up again in the final quarter of 2023.”

Basically the labor market and consumption are the only things holding up the economy at the moment. The labor market’s strength should have an asterisk next to it given that the tightness is due to people opting out of the labor market

I published another article on Substack over the weekend, where I discussed Friday’s awful existing home sales number, did a deep dive into MBS spreads and the effect of QE / QT. Housing affordability (see the matrix below) also gets an in-depth discussion as well. A lot of the stuff I cover on The Weekly Tearsheet doesn’t really get covered in here. Check it out and please consider subscribing.

The street estimate for Q4 GDP is 2.7%, which is pretty robust, but the Atlanta Fed’s GDP Now estimate is for 3.5%. Both numbers seem high given some the ISM numbers showing contraction in manufacturing and services. Maybe some of this is inventory build which will have the effect of “borrowing” growth from Q1.

I am accepting ads for this blog as well if you would like to highlight something your company is offering or want more visibility. I also offer white-label services which give you the ability to use this content for your own daily emails. Please feel free to reach out to nyitray@hotmail.com if you would like to discuss this further.