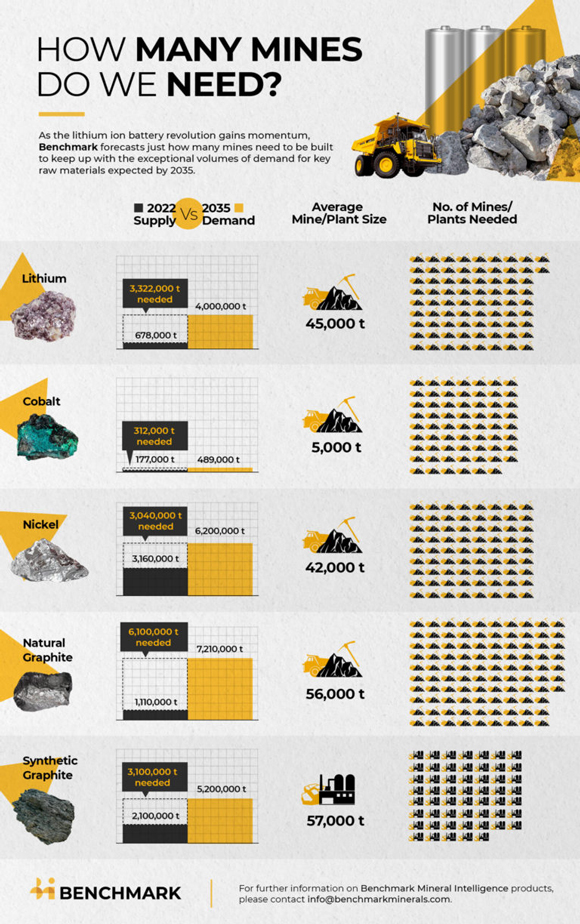 EVs, 3D-printed houses, automated homes, and ultra-efficient renewable energy power generators are just some of the future innovations leading us to a better, cleaner world.

And with the stroke of a pen, governments across the globe have started this carbon-free, pollution-free, automated utopia we all want.

Yet, there is one KEY factor that environmentalists, leaders, CEOs, and celebrities have left out?

How do we get the raw materials to build this multitrillion-dollar dreamland?

Knowing whether the world can actually supply the critical metals needed to fuel the ?green revolution? would be a logical first step before going about an ambitious carbon reduction policy.

Can we actually get enough stuff out of the ground to build the replacement technology?

This is not a question on the radar of politicians, climate scientists, or advocates pushing change.

Commodity experts were not invited to the Paris or Glasgow climate summits.

It was a decision reserved for governments and climate scientists.

Yet the main limiting factor for all this policy-driven change is the availability of raw materials.

Policymakers have made BIG assumptions that resources will be available.

They?re relying on old economic rules of supply and demand.

Create demand for critical metals and the supply will invariably arrive.

Basic economic theory to them.

However, by pushing this market philosophy onto a finite resource like critical minerals, the demand side of the equation starts to levitate precariously upward.

Supply of critical metals is not a straightforward process of increasing production as it would be for iron ore mining.

Then, assuming exploration is successful…

What does all this mean for commodity investors?

Well, while ?Ass-umptions make an Ass? out of our leaders, they?ve unknowingly gifted you a once-in-a-generation investment opportunity.

Remember, it takes at least six years to bring an ore body from discovery to production.

That?s assuming an economically viable source of critical metals can be discovered in the first place.

It all boils down to a massive repricing of mining companies that ALREADY own the exceedingly difficult to find critical metal deposits.

But first, what makes a metal so ?critical? in the first place?

The ?Great Green Energy Transition? isn?t the only sector that will need critical metals in the future.

It includes ALL segments of the economy.

A tidal wave of changing technologies means an enormous shift in the types of raw materials needed.

From healthcare to defence to manufacturing, the commercial need for these metals is diverse.

Critical minerals include those traditional elements like copper, nickel, and aluminium.

But thanks to the birth of highly specialised technologies, obscure-sounding metals also sit at the forefront in determining how we live into the future.

Without trying to make this sound like a Year 10 Science class, we only need to take a peek at some of the bizarre-sounding metals now shaping future investment in mining.

There?s promethium — a healer and a weapon.

This element is a critical component for making pacemakers, but it?s also used for building self-guided missiles in defence.

Or niobium, scientists have capitalised on its unique ?superconducting? properties allowing them to develop new kinds of superfast, highly energy efficient large-scale computing without the need for semiconductors.

The potential for critical metals is endless, the only limitation is SUPPLY

It?s no wonder resource companies have started eagerly sifting through old drill core in the hope of finding a strike in critical metals.

It?s an inexpensive strategy that could gift a company an instant windfall.

Finding a mineable body of one of these modern-day gems would be an immediate game changer for the company.

But these small wins won?t be enough to supply the breathtaking level of demand that?s coming…

For example, a mineral known as?natural graphite, used in cathodes of lithium-ion batteries, needs a mere 600% increase in its current production to meet future demand!

Take a look for yourself, projected demand for critical metals is colossal when you compare it with current 2022 production levels:

Are these metals really that rare?

The answer to this question has been muddied by those unwilling to accept supply issues.

Some pundits have argued the so-called ?critical metals? are not, in fact, rare at all.

While this may be true in some instances, it?s a distraction from reality regarding how it affects supply.

Critical metals must be found in high enough concentration to allow economic extraction.

?Although these elements [Rare Earths Elements] are referred to as rare they are not particularly rare in the earth?s crust. Cerium is the 25th most abundant crustal element and lutetium, the scarcest REE, is about the 60th most abundant. However, it is not common for them to occur in concentrations sufficient to support commercial mining operations.?

This is the key point.

Some critical minerals occur in the Earth?s crust at elevated levels, but this doesn?t equate to a ready supply.

The issue of scarcity is based on the ability to support commercial mining operations.

For REEs and many other critical metals, finding ACTUAL mineable ore bodies is what makes these particular metals RARE.

You also need to consider this…

One of the key authorities in determining the supply of economic minerals is the United States Geological Survey (USGS).

As well as having a critical role in monitoring the potential for natural disasters across the US, the organisation has been tasked with calculating the world?s entire supply of raw materials.

From this, the agency drills down to find which metals are ?critical?.

Not an easy task!

This is not a ?for fun? project undertaken by a friendly team of geologists; it?s a US Government directive to establish the metals needed for economic survival.

This is serious stuff. The USGS sends geologists across the world to define major reserves, even the war-torn corners of Afghanistan and Syria are visited to ensure reserves are measured correctly.

This is what the USGS has to say about critical metals (emphasis added):

?A material essential to the economic or national security of the U.S.and which has a supply chain vulnerable to disruption. Critical minerals are also characterized as serving an essential function in the manufacturing of a product, the absence of which would have significant consequences for the economy or national security.?

In February 2022, the organisation released a detailed list of no less than 50 minerals deemed as ?critical?.

Interestingly, the most recent addition was nickel, added just prior to the Russian invasion of Ukraine.

With Russia being a major exporter of nickel, did the USGS know what was coming or was it just a coincidence?

But something you can be certain of, the USGS is a well-connected outfit playing a critical role in analysing economic security.

While many OPEC countries publish their version of the critical metals list, it?s the USGS that I pay attention to.

When it comes to national security the US does not tread lightly.

With the full backing of the federal government and close relationships with the CIA, the organisation can pierce the deepest corners of the planet and assess impending supply issues for raw materials.

It is free of investor ?spruiking? or self-interest downplaying supply issues.

Another crucial tool in the arsenal of commodity investors trying to uncover the facts.

We?ll delve more into critical metals in our next issue.

But for now, what does this all mean?

A looming supply crunch for critical metals is coming.