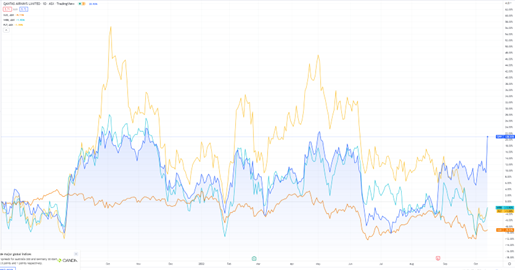 QAN shares are up 10% year to date but are flat over the past 12 months:

Qantas hit pre-COVID service levels in the first half of October as travel demand continues to rebound following the pandemic embargo.

Revenue intakes for domestic leisure travel have risen to 130% of pre-COVID levels. Revenue for business purposes has rebounded to 100%.

However, domestic performance wasn’t without its hiccups.

Jetstar had a bad September when six of its 11 wide-body aircraft went out of service simultaneously.

And Qantas Loyalty is expecting to post ‘record earnings’ for the first half. The segment is expected to reach its FY23 EBIT target of $425–450 million.

The airline has decided to use another $200 million for funding operational implications, battling high sick leave requests and buffering against supply chain delays.

With pandemic woes mostly behind them, Group International capacity is anticipated to surpass 60% of pre-pandemic levels.

‘Qantas’ operations are largely back to the standards people expect, and Jetstar’s performance has improved significantly in the past few weeks and will keep getting better with the extra investments we’re making.

‘The fact our financial recovery has accelerated means we can invest more in rewarding our employees, who are doing an amazing job. We’ll spend an additional $40 million a year on permanent pay increases for our people on top of the $200 million in cash and share bonuses we’ve announced for our people.’

Despite this, the airline thinks people are prioritising travel:

‘Robust demand indicates that people are prioritising spending on travel above other categories, which supports the Group’s ability to fully recover higher fuel costs through fares.’

QAN’s fuel costs are now 75% higher than pre-COVID, but the airline is offsetting this with higher fares.

Qantas and its customers aren’t the only ones dealing with higher fuel costs and higher inflation.

The malaise is widespread.

Few are immune to inflationary pressures.

Households and businesses all over are feeling the pinch.

But some businesses are better placed to deal with inflation than others.

In fact, some stocks might even be ‘inflation busters’ in the current environment.

Our team has recently put together a research report on our five top dividend stocks.