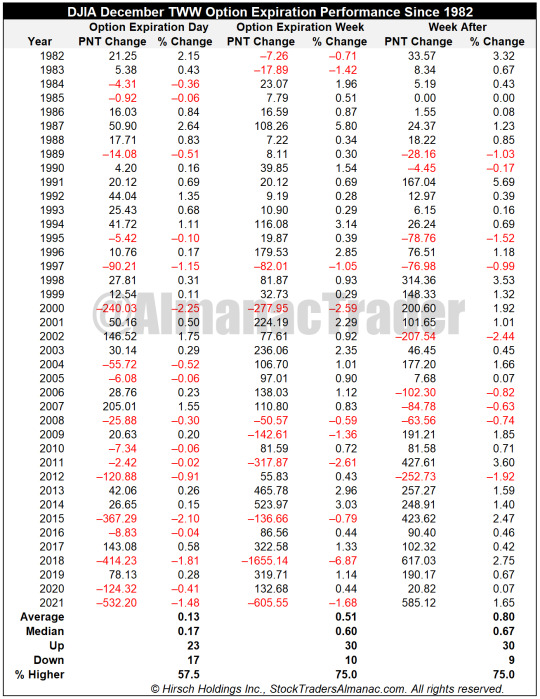 In fact, the week of options expiration and the week after have the most bullish record of all quarterly option expirations (page 108, Stock Trader’s Almanac 2022 & 2023 Almanac). Since 1982, DJIA has advanced 30 times during December’s options expiration week with an average gain of 0.51%. S&P 500 has a similar, although slightly softer record.

However, the record is not pristine. Last year, accelerating inflation metrics triggered concerns the Fed was behind the curve with monetary policy. In 2018, DJIA and S&P 500 suffered their worst weekly loss as the Fed remained hawkish and determined to raise interest rates even as economic growth was slowing and Treasury bond yields were falling. In 2011, Europe’s debt crisis derailed the market. In 2012, the threat of going over the fiscal cliff triggered a nearly 2% loss the week after.

Going into next week, the market’s bullish historical trends will be tested by the Fed and CPI. The Fed is widely anticipated to raise its rate by 0.5% to a new range of 4.25%-4.50%. Today’s slightly hotter than expected PPI raises the stakes slightly, but the trend of lower inflation does remain intact which suggests the Fed is likely to remain on the course.