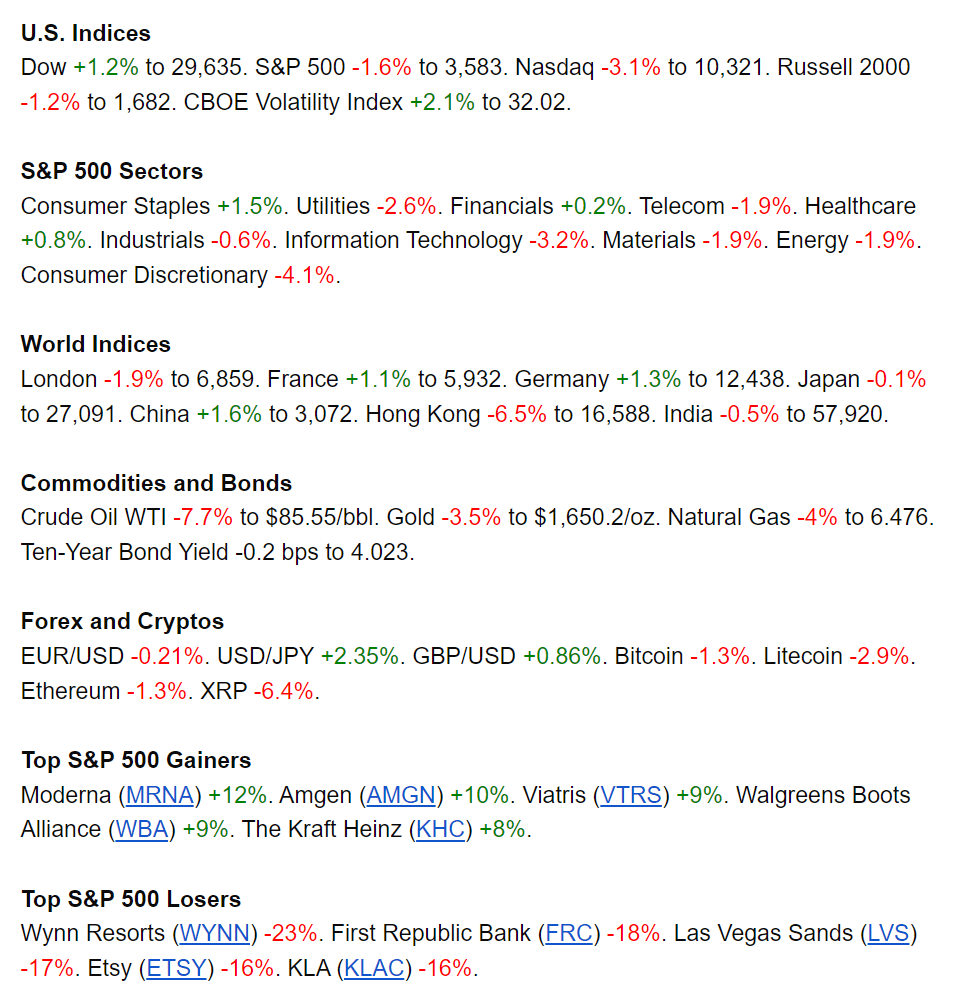 Stocks were on a roller coaster ride last week the major averages seeing a historical, but epic turnaround.

A hotter-than-expected rise in core CPI inflation had all the hallmarks of a huge selloff, but the broader market bounced back more than five percentage points on an intraday level. Shares surged and buyers looked to be back in control, but inflation reared its head again at the last trading day and the University of Michigan’s survey showed inflation expectations one year out rising for the first time since March.

What’s on Tap This Week?

The first busy week of the earnings season will feature reports across multiple sectors with Bank of America (BAC), Johnson & Johnson (JNJ), Netflix (NFLX) and Procter & Gamble (PG) all due.

The economic calendar will include updates on industrial production and the Empire manufacturing index.

On the global stage, the Communist Party Congress begins in Beijing with President Xi Jinping expected to secure a historic third term.

The message from Fed officials isn’t wavering from the hawkish stance. The market is still pricing in more than an 80% chance that the FOMC boosts rates by another 75 basis points in November.

Cleveland Fed President Loretta Mester said yesterday that the Fed has more hikes to go before the fed funds rate becomes restrictive, even at the expense of growth. “With growth well below trend over the next couple of years, it is possible that a shock could push the U.S. economy into recession for a time,” she said.

Tesla earnings preview: Tesla (TSLA) will report earnings on October 19 in what is likely to be one of the more closely-watched reports. Wells Fargo has moved up expectations for a slight Q3 beat even though the EV maker’s deliveries report shook investors. Investors are looking to see how to model benefits for TSLA from the Inflation Reduction Act, which sets up well for the company on the demand side. Research from Bespoke Investment Group revealed that when Tesla stock has fallen more than 20% over a seven-day stretch – the stock averaged gains of 37%, 84%, and 238% over the next month, three month, and one-year timespan, respectively.

Netflix earnings preview: Netflix (NFLX) will report earnings on October 18 with analysts looking for revenue of $7.85B and EPS of $2.17. Consensus also calls for 1.1M paid subscriber additions for the quarter, a tally that was likely skewed by Stranger Things. The conference call is likely to dive into the issue of the streamer’s new AVOD tier. Morgan Stanley said it does not believe there has ever been a global media business of the scale of Netflix that moved from ad-free to ad-supported. “For marketers, this represents a massive increase in potential premium video ad impressions around the world and we expect strong demand,” noted analyst Benjamin Swinburne.

Johnson & Johnson earnings preview: Bank of America warned that JNJ could lower 2022 guidance nominally due to the macro backdrop, as well as continued F/X headwinds and inflationary pressure. Recent management commentary at conferences suggests that the healthcare giant expects improving trends in the early part of the new calendar year. On the earnings call, analysts will be looking for the ex-vaccine growth forecast and color on the medtech business.

Analysts are not looking for bullish earnings numbers that can give the overall market a boost, with expectations for earnings per share growth consistently coming down during the reporting season and an overall sense that the broader market will react badly.

Downward revisions: Third-quarter S&P 500 (SPY) EPS growth is now expected to be 2.6%, down from 9.8% in July, according to FactSet. Analysts have cut profit forecasts by $34B and if the consensus is correct, it would be the worst quarter for bottom lines since Q3 2020, in the depths of lockdown, the FT reported.

What does that mean for stocks? According to the latest MLIV Pulse survey of investors, more than 60% believe this earnings season will push the S&P 500 lower. Among the more than 700 respondents, high-level asset allocators are the most pessimistic about the impact of earnings, while risk managers are the most optimistic.

“If we are headed into a recession next year, which seems highly probable, earnings uncertainty may replace rate pressure as the chief obstacle to higher equity prices,” MKM strategist Michael Darda wrote. “Thus, the next 10 months could be tricky.”

“Long-term investors should thus have time to build long positions into weakness and volatility during the quarters ahead,” Darda said. “Forward and trailing operating earnings for the S&P 500 have typically fallen 15%-20% in recessions. So far, estimates have peaked and plateaued rather than cratered. However, forward indicators do point to more weakness ahead.”