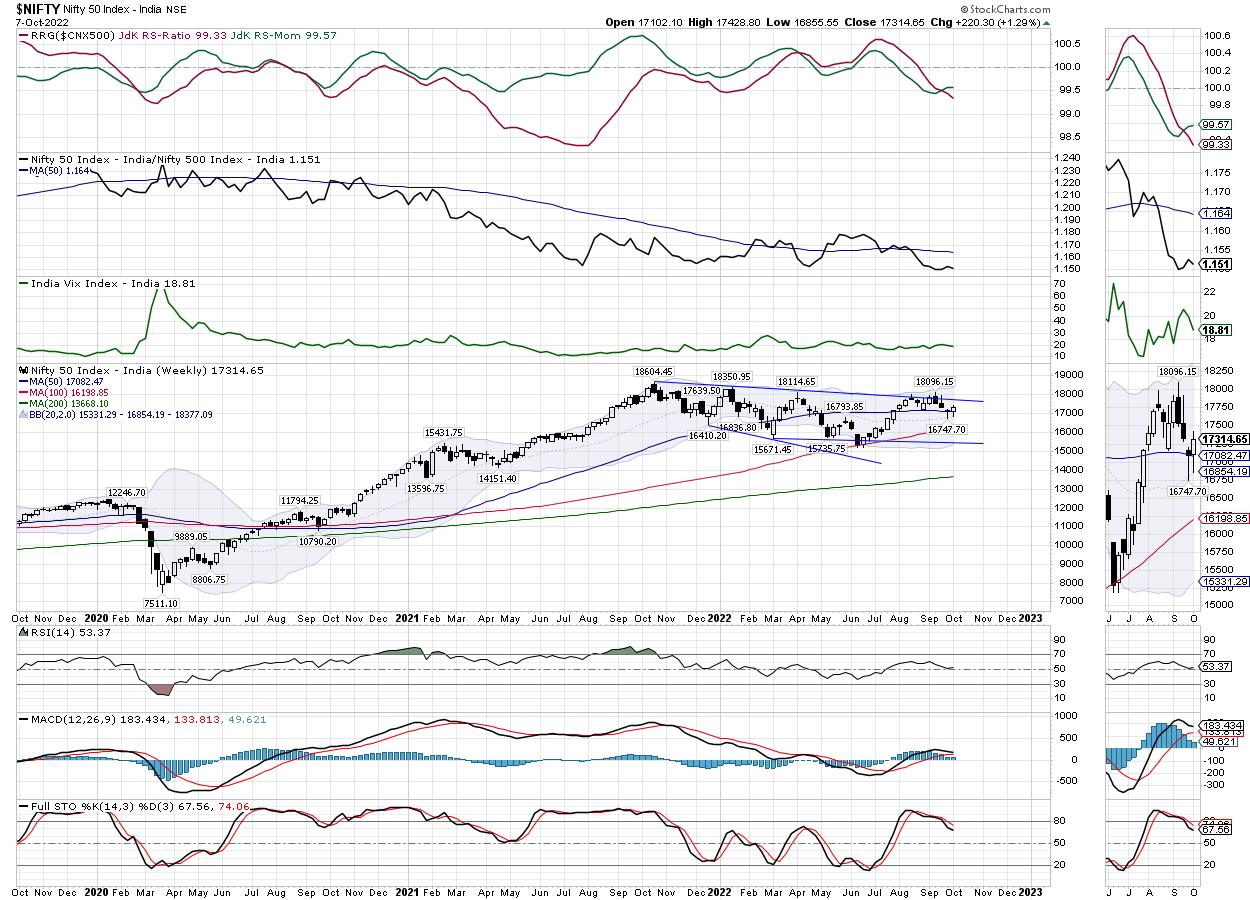 In the previous technical note, it was mentioned how the Indian equities stayed in a defined range as they traded within the defined corners while respecting basic technical levels. In the week that has gone by, the NIFTY once again made measured moves; continued to strongly inherit buoyancy from the US markets that tried to stabilize themselves and put a potential temporary bottom in place. The previous week was a four-day week with one trading holiday on account of Dussehra; the NIFTY moved in a 573.25 range before ending the week on a positive note. The headline index NIFTY50 closed the week with a net weekly gain of 220.30 points (+1.29%).

The week before the previous week had seen the NIFTY bouncing off from the 20-Week MA which stands at 16854. It had halted its move near the 50-Week MA; this week, it moved above that level as well. The 50-Week MA positions itself at 17084. From a technical perspective, the present structure of the weekly charts makes the zone of 16850-17100 a strong support zone for the markets. So long as this zone stays defended; all that the markets would ever see would be just corrective turbulence but no major breakdown on the charts. Only if the 16850 levels stand violated, we will need to take that technical development rather seriously.

The weekly RSI is 53.37; it stays neutral and does not show any divergence against the price. The weekly MACD is bullish and trades above the signal line. However, the narrowing slope of the Histogram shows that the momentum on the way up is decelerating; it would be interesting to see if this gets corrected. No significant formations were seen on the Candles.

Although Indian equities remain resolute and relatively very strong against the global markets., the weakness in the global markets still affects the domestic market. However, with the US markets trying hard to form a potential base for themselves, any stability or a rebound in those markets will have very stronger repercussions on the domestic market given the strong relative strength. The present texture of the markets has grown both stock-specific and defensive. We will see some defensive pockets doing well as well as some select names from Auto, PSE, and Media posting a good show over the coming days. A cautiously positive approach is advised for the coming week.

Sector Analysis for the coming week

In our look at Relative Rotation Graphs®, we compared various sectors against CNX500 (NIFTY 500 Index), which represents over 95% of the free float market cap of all the stocks listed. 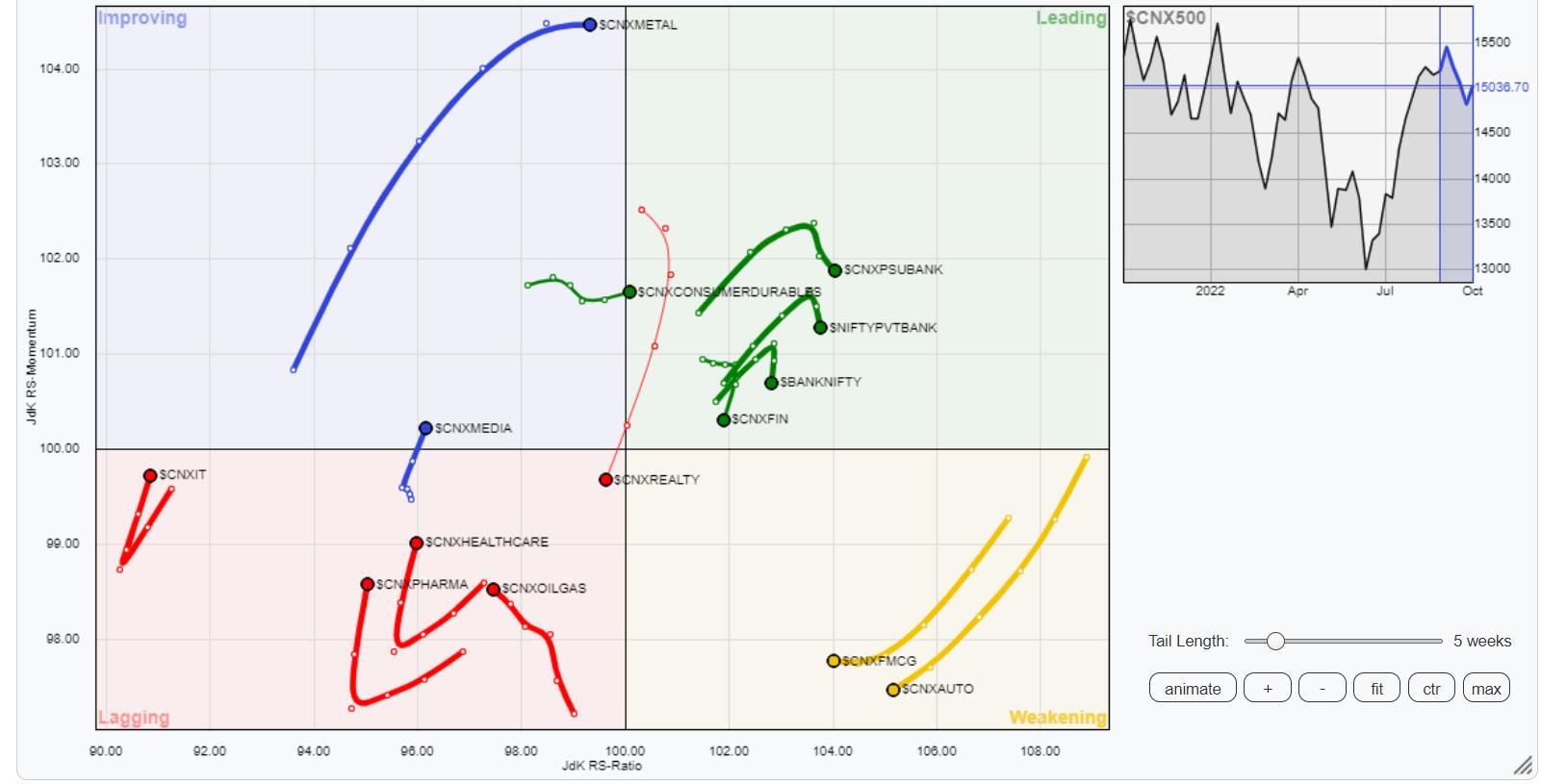 The analysis of Relative Rotation Graphs (RRG) shows that NIFTY Midcap, Financial Services, and NIFTY Bank are inside the leading quadrant. They will continue to relatively outperform the broader markets are they are also seen taking some breather in terms of their relative momentum. Better placed within the leading quadrant is the NIFTY PSU Bank Index; this group will also see itself relatively outperforming the broader NIFTY500 Index.

All the incumbents of the lagging quadrant; Energy, Infrastructure, IT, PSE, and Pharma Sectors are seen sharply improving on their relative momentum against the broader markets. These pockets may see stock-specific performance over the coming days.

Important Note: RRG™ charts show the relative strength and momentum for a group of stocks. In the above Chart, they show relative performance against NIFTY500 Index (Broader Markets) and should not be used directly as buy or sell signals.